A stellar cast of VTubers and Artistes await you at AFA Night LIVE!
Come join us for all 2 days! 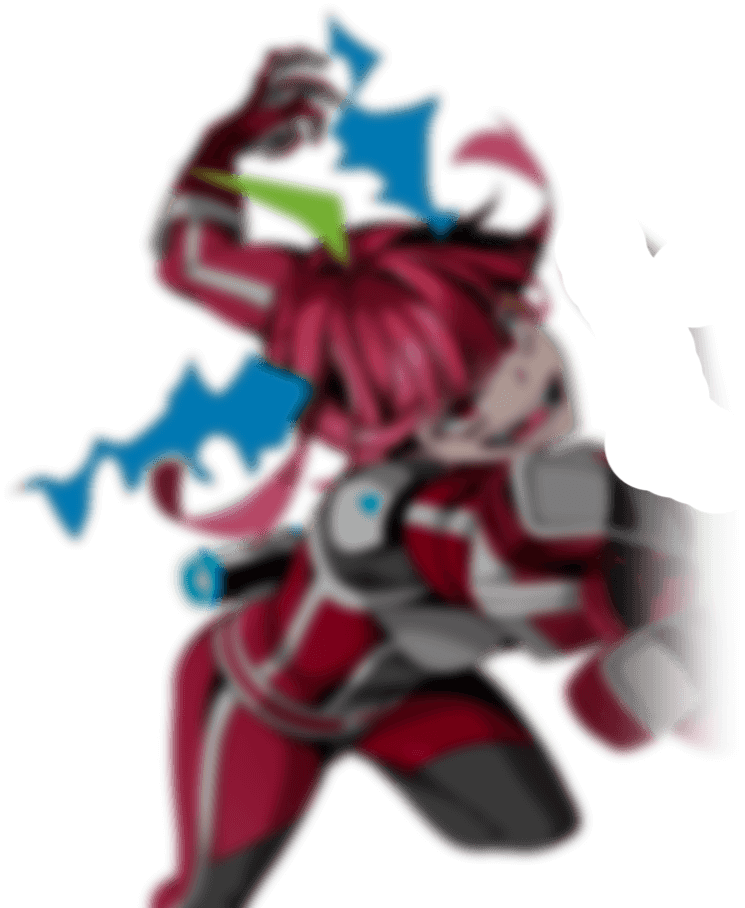 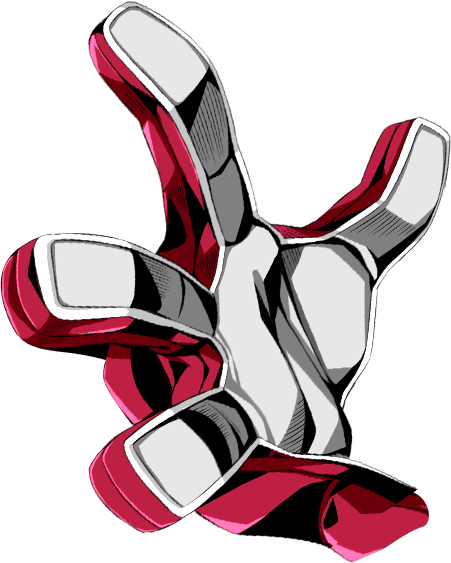 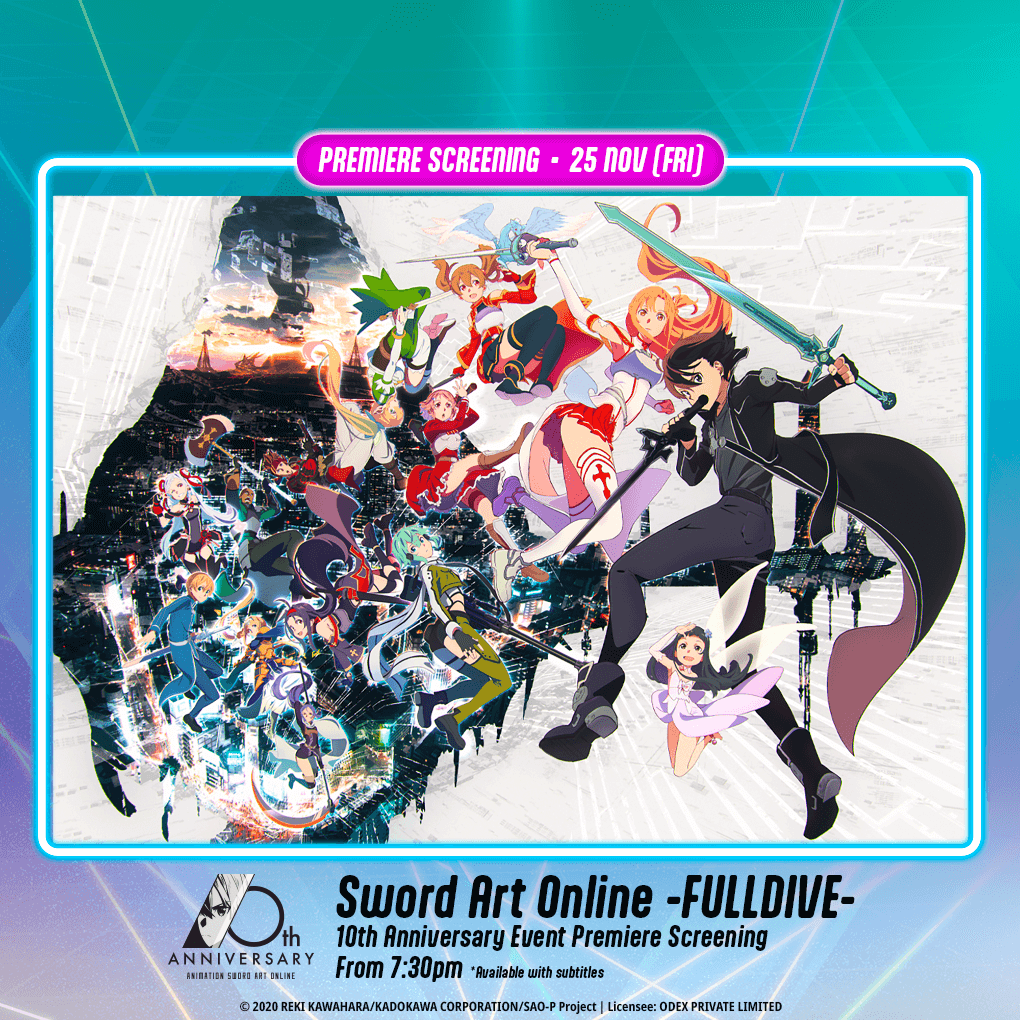 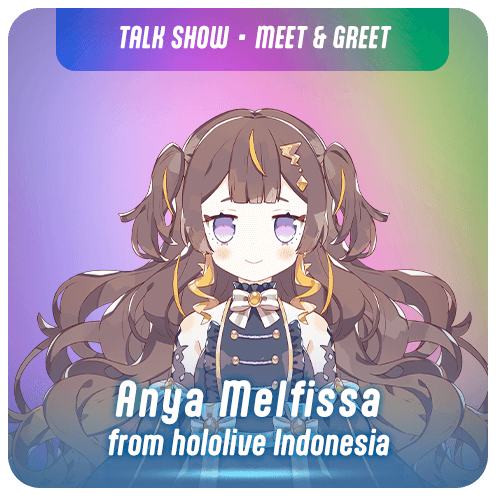 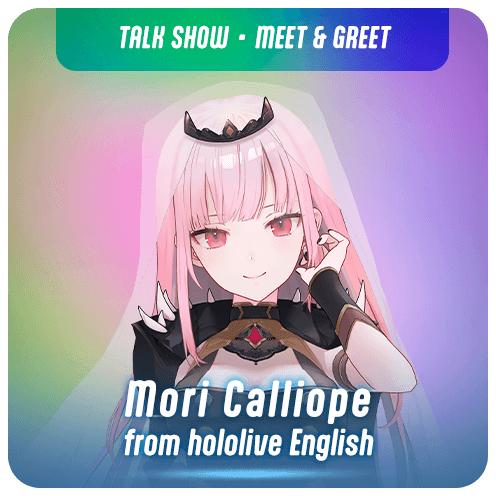 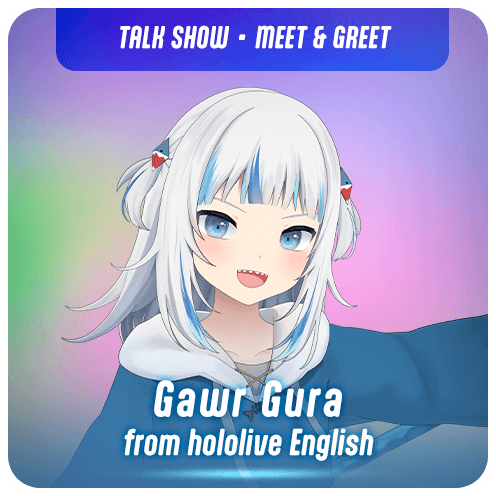 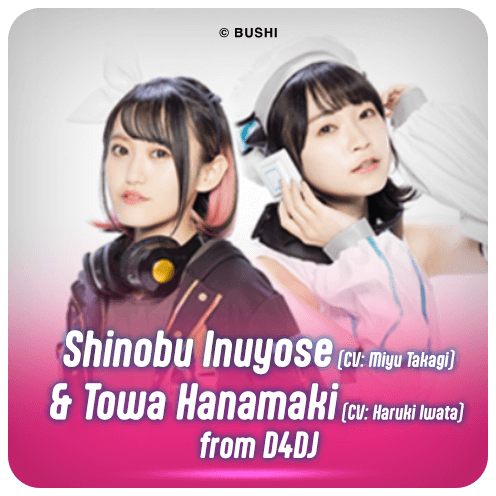 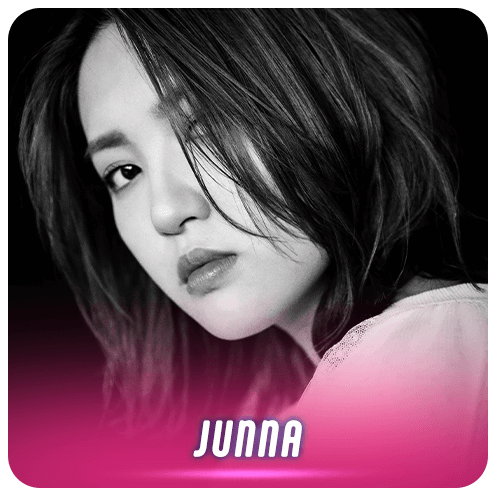 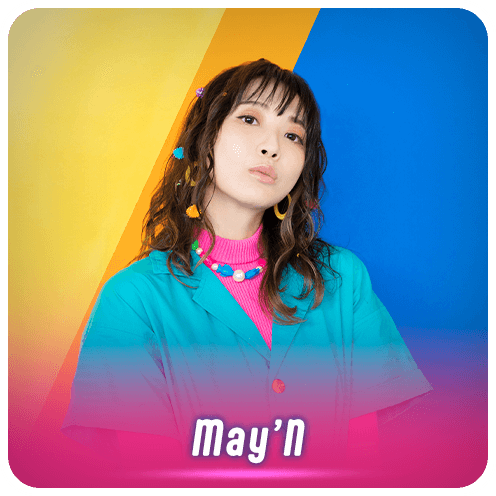 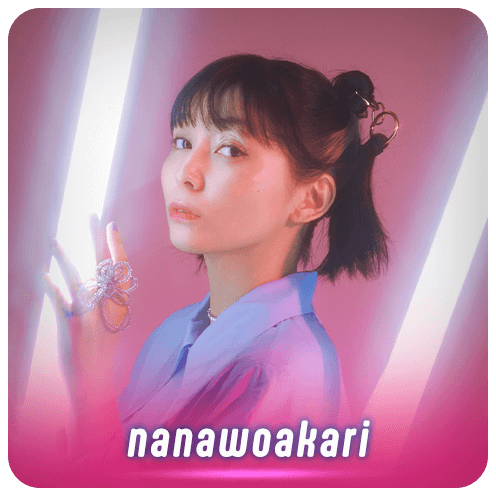 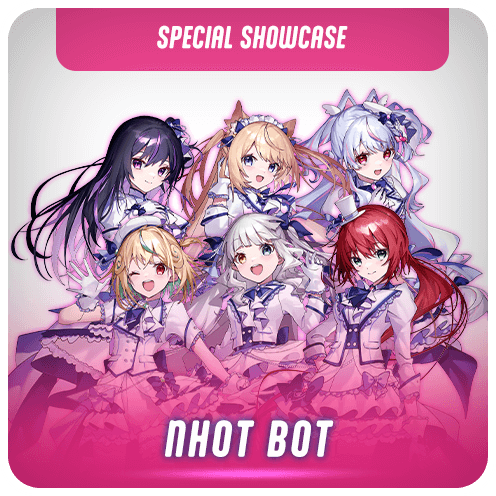 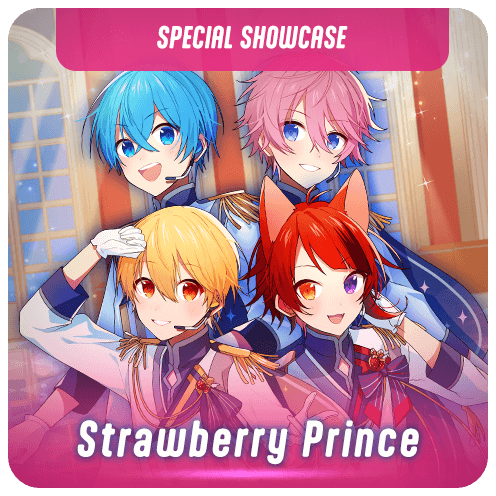 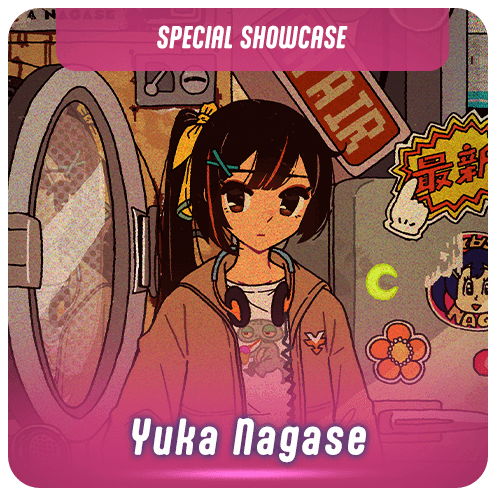 GET YOUR TICKETS NOW 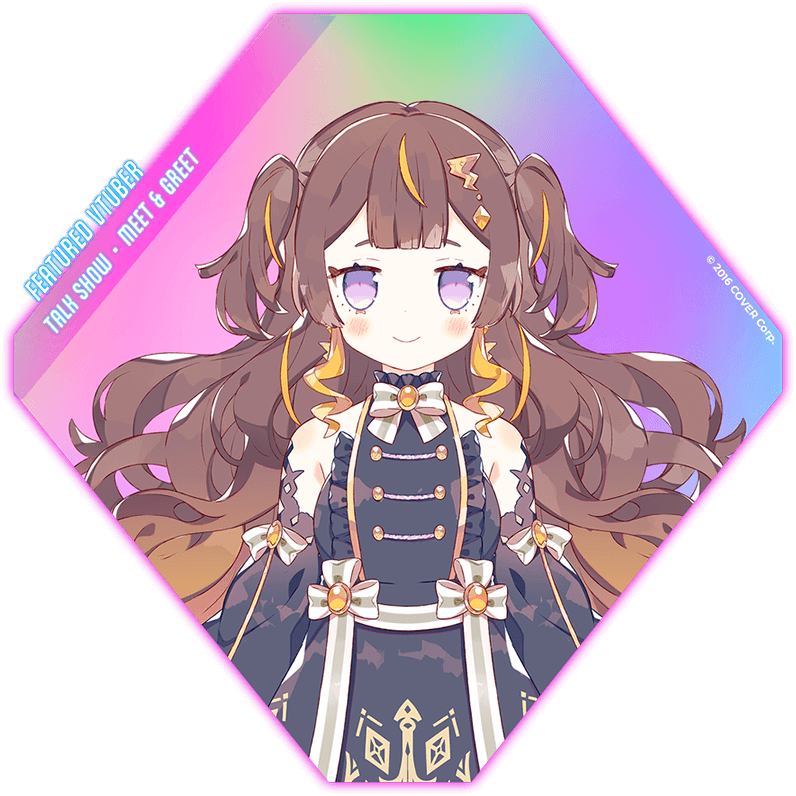 An ancient weapon known as "Keris", she was granted human form through a mystical ritual performed by her master.

She's just about always sleeping or playing games. Living mostly alone for so long has made her tend to be apathetic towards things and people she's uninterested in, but when talking about things she likes, she can be quite childlike and passionate.

Her base personality is actually apathetic, especially towards humans. Don't let looks fool you - that's what every foolish human always does to themselves somehow. from hololive Indonesia 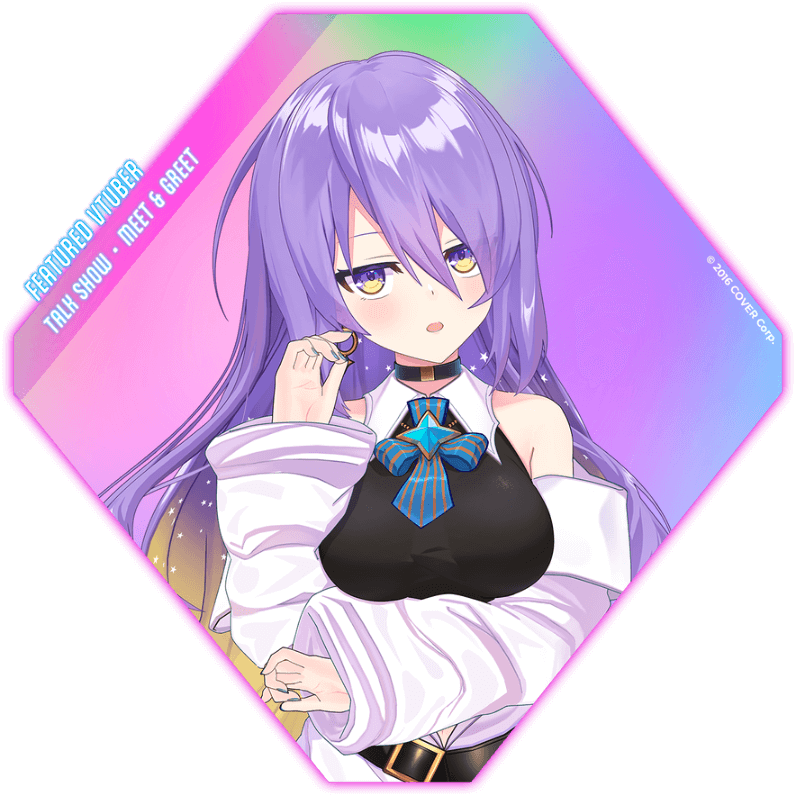 A model turned VTuber, who has been known for her powerful singing and dance. On some rare occasions, Moona's stream might be visited by Moona's "another personality," Hoshinova. That has deeper big sister-like voices and sadistic tension. Pay attention to her streams to meet Hoshinova! 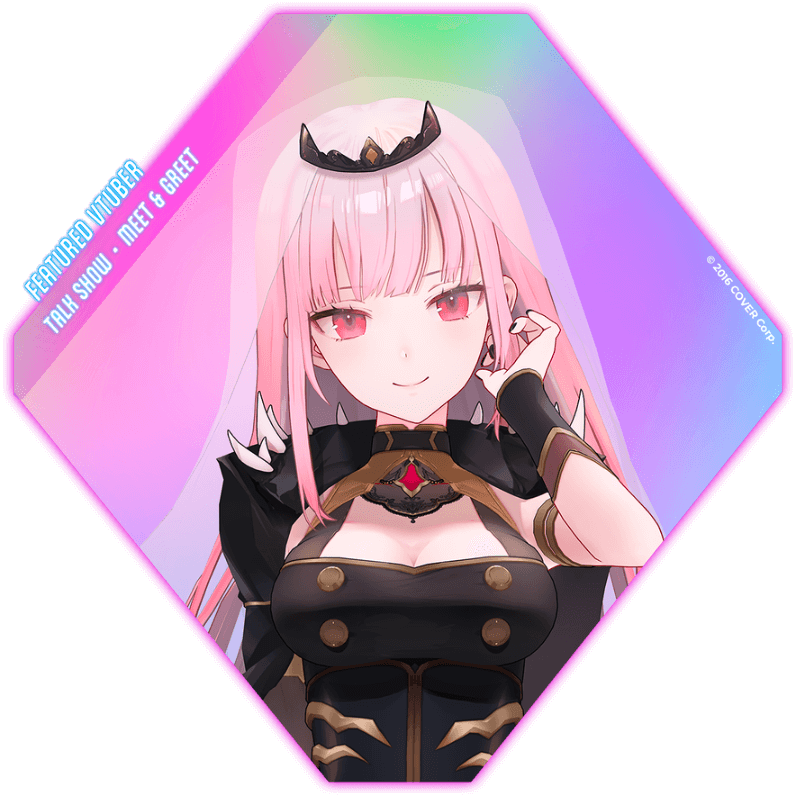 Mori Calliope
from hololive English
The Grim Reaper's first apprentice. Due to modern medical care causing a decline in the reaping business, Calliope decided to become a VTuber to harvest souls instead. It seems that the ascended souls of the people who are vaporized by the wholesome interactions between VTubers go to her as well.

That being said, despite the image her hardcore vocals and manner of speech gives off, she's actually a gentle-hearted girl who cares greatly for her friends. Gawr Gura
from hololive English
A descendant of the Lost City of Atlantis, who swam to Earth while saying, "It's so boring down there LOLOLOL!"

Gura bought her clothes (and her shark hat) in the human world and she really loves them. In her spare time, she enjoys talking to marine life. 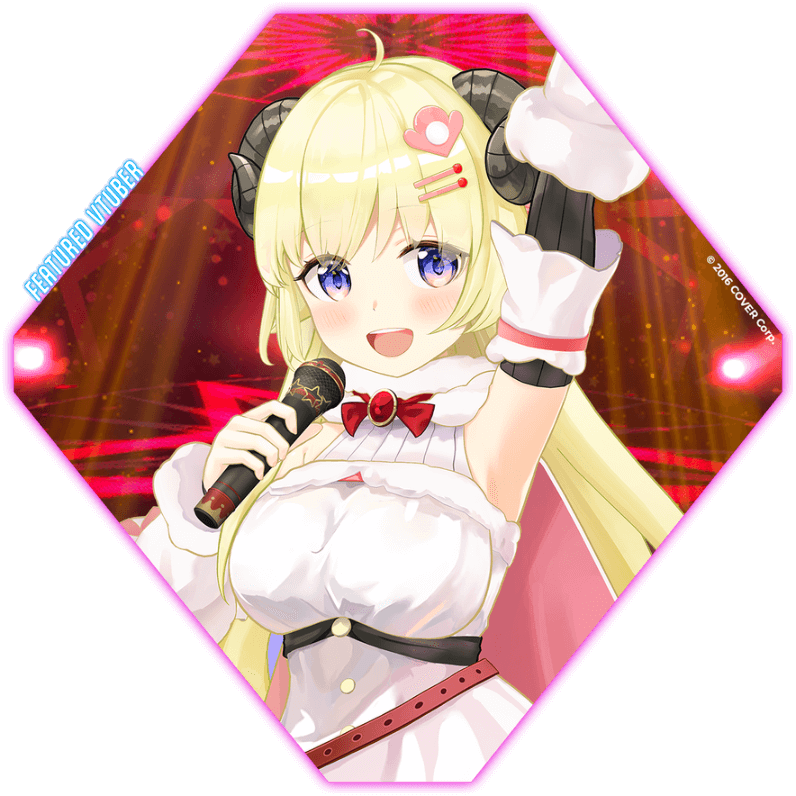 Make sure you check out her Tsunomaki Rock Paper Scissors videos as well! 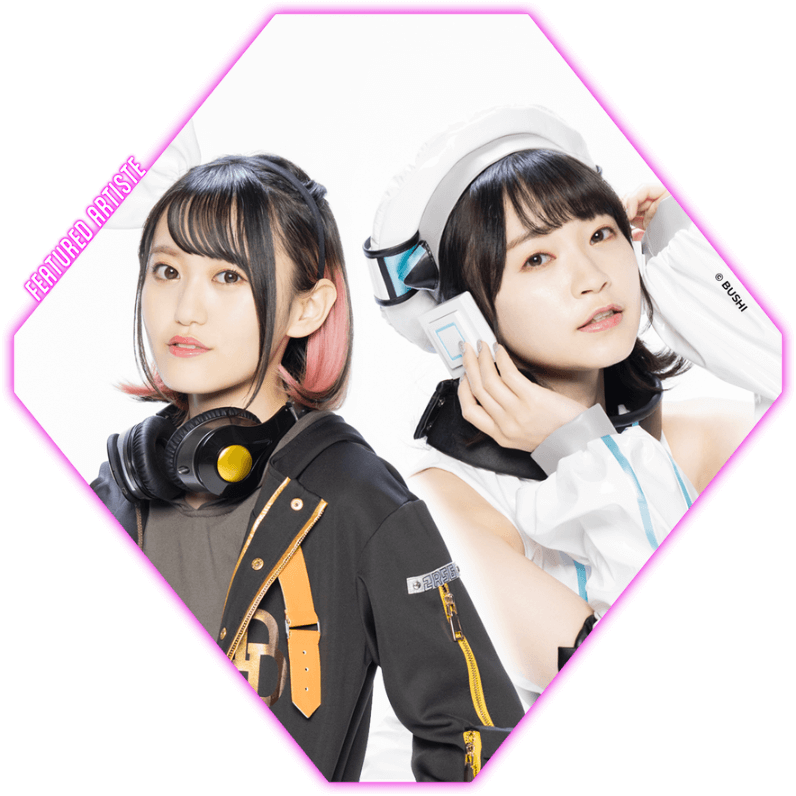 Shinobu Inuyose (CV: Miyu Takagi)
& Towa Hanamaki (CV: Haruki Iwata)
from D4DJ
D4DJ makes its first appearance at AFA Singapore! A media mix project from Bushiroad focused on the world of DJs, the project revolves around various forms of content such as anime, game, and live concerts performed by the voice actresses.

The DJ of Peaky P-key, Shinobu Inuyose (CV: Miyu Takagi) is here to take your senses to the peak through her unit's sound. Stoic and confident, Peaky P-key strives for a mastery of music through practice and refinement of their abilities.

Meanwhile Photon Maiden is a unit centered around some of Japan's most talented young women. Their member Towa Hanamaki (CV: Haruki Iwata) will transport you to a special world of their own through the unit's futuristic visuals & musical sense.

Come catch their special DJ sets for an unforgettable experience at their very first performance in Singapore! 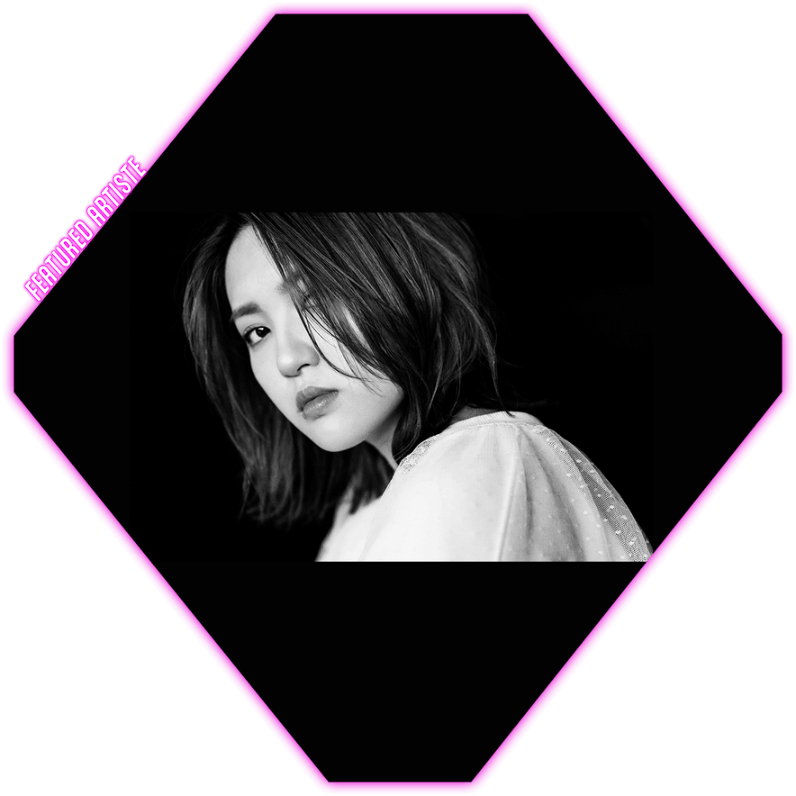 Junna
Along with the "Mobile Suit Gundam" series and "Neon Genesis Evangelion", the "Macross" series is counted as one of Japan's three major robot anime series.

JUNNA is the singing voice of Mikumo Guynemer, the ace vocalist of the singing unit "Walküre", in the latest Macross TV anime "Macross Delta".

At that time, she debuted at the age of 15 -- the youngest ever in the historic "Macross" series, which has been broadcasting for 35 years.

In June 2017, she made her solo debut with her first mini album, "Vai! Ya! Vai!". On the release day of her first single "Here" (The opening theme for the TV anime “The Ancient Magus' Bride”), it reached #1 on the daily charts of 10 different streaming platforms, and was certified Gold by the Recording Industry Association of Japan.

JUNNA's 5th single "Umi to Shinju" was the opening theme of the original TV anime "Fena: Pirate Princess". The song was produced by Yuki Kajiura, who won the Japan Academy Award, Music Award for the music of the TV anime "Kimetsu no Yaiba".

On 21 June 2010, she celebrated the 5th anniversary of her solo debut, and started her first radio program "CrosSing You" on bayfm.

JUNNA was also charge of the first theme song for Tokai TV and Fuji TV nationwide web drama "Kojinsa Arimasu" (“Love You Just as You Are”) that started airing in August. 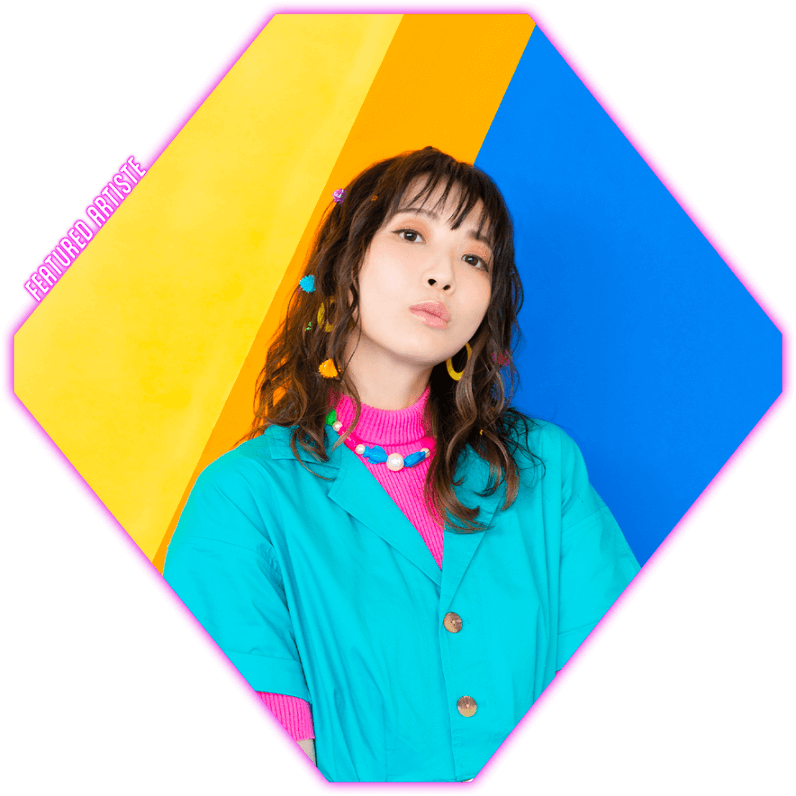 May'n
May'n is a vocalist who attracts people both in Japan and around the world with her impressive singing power and high vocals, performing multiple genres of music, including pop, rock, dance, and R&B.

She made her major debut at 15 years old in 2005. She has been at the top of the charts for numerous TV anime, drama, movie and game theme songs. In addition to holding independent performances at Nippon Budokan and Yokohama Arena, she also held a world tour and solo performances in 16 cities around the world. She especially achieves great popularity in the Greater China region, she has received the award for 3 consecutive years at the WEIBO Account Festival in Japan, organized by SNS service "Weibo" in China. She was also the first Japanese award winner at the ASIAN MUSIC FESTIVAL 2019 held in Shenzhen, China.

She has built her career for more than 15 years, and she will never stop evolving. 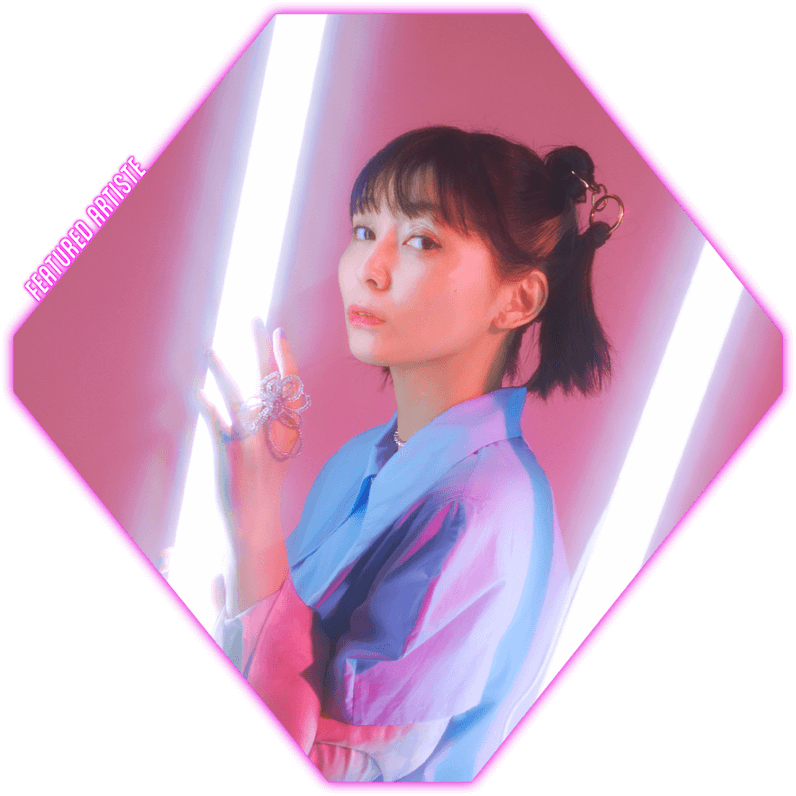 nanawoakari
nanawoakari has over 700,000 YouTube subscribers and her music videos have been viewed over 300 million times on video-sharing sites.

In 2018, she made her major debut with "One Room Sugar Life", the theme song for the anime "Happy Sugar Life".

In 2020, she released "Turing Love feat. Sou", the ED theme song for the anime "Science Fell in Love, So I Tried to Prove It", which became a social media sensation. The MV has over 70 million views and is still popular for its covers.

Her addictive funny voice and character have made her popular, and she is beloved as an icon of her generation for her discommunicative behaviour, comicality, and clunky character called "no good angel". 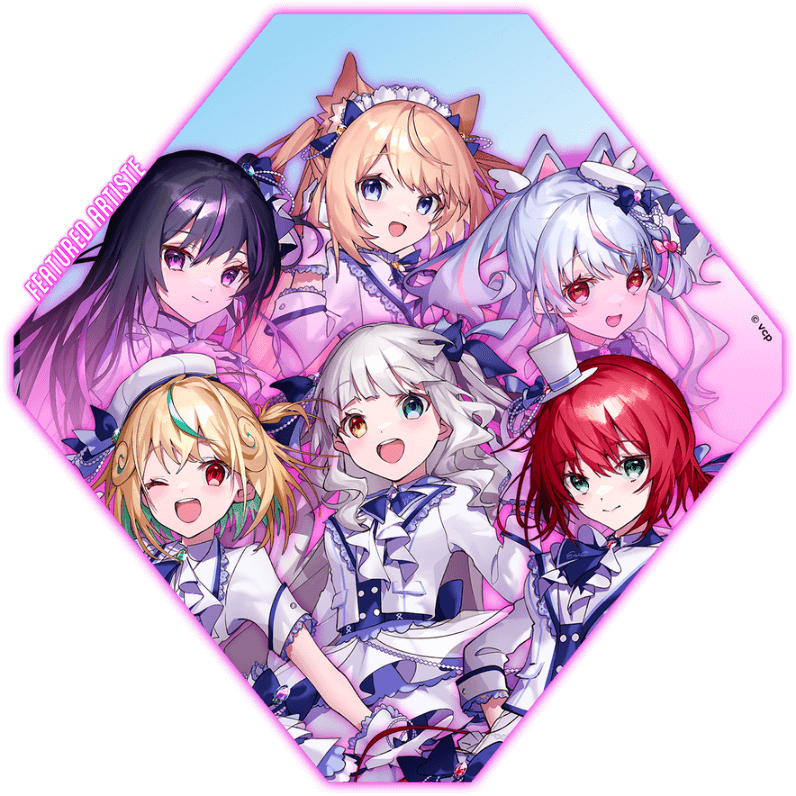 NHOT BOT
The group is a six-member virtual idol group formed by three Japanese VTubers who are very popular in China, plus three members newly selected through auditions. With Rino Sashihara as creative director and having full support from Sony Music and bilibili, the group will bring Japan's idol culture to the world.

The group was named "NHOT BOT" with the meaning that a new and precious existence, "not a bot" that is neither animation nor human beings that you can't meet but you can choose to meet. 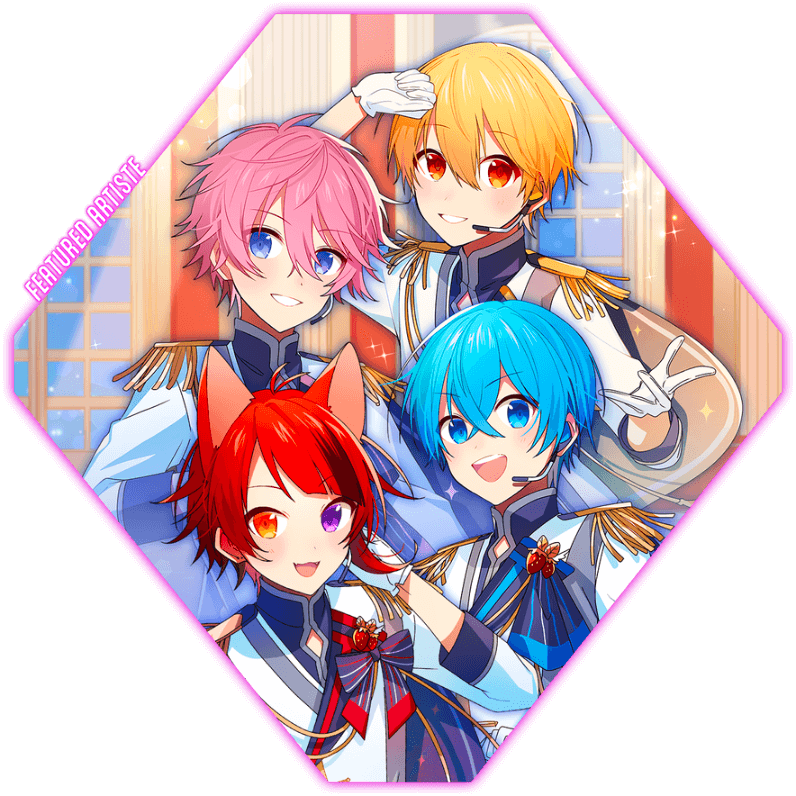 In addition to their musical activity and group videos, each member has gained much popularity through their active streaming of their own various genres and passions. Including singing videos, live gaming, short animations, as well as variety clips.

The group's official YouTube channel "Sutopuri Channel" has over 1.72 million subscribers, with the total number of combined views across all their channels exceeding 4.5 billion! They also took first place in the "People" category of the Yahoo! Japan Kids Search Rankings (Dec. 2021), for the second year in a row!

With their music, Strawberry Prince has released four albums since 2019, all achieving over 200,000 copies in sales. They also held their first ever major dome tour, selling out across five venues nationwide this year. In August, the group released their first digital album – "Are You Ready?", snatching first place on iTunes Japan's daily album ranking. Strawberry Prince is definitely one new-age virtual artist you don't want to miss!

*Strawberry Prince will be taking part in AFA 2022's live stage with a video performance in their virtual outfits. 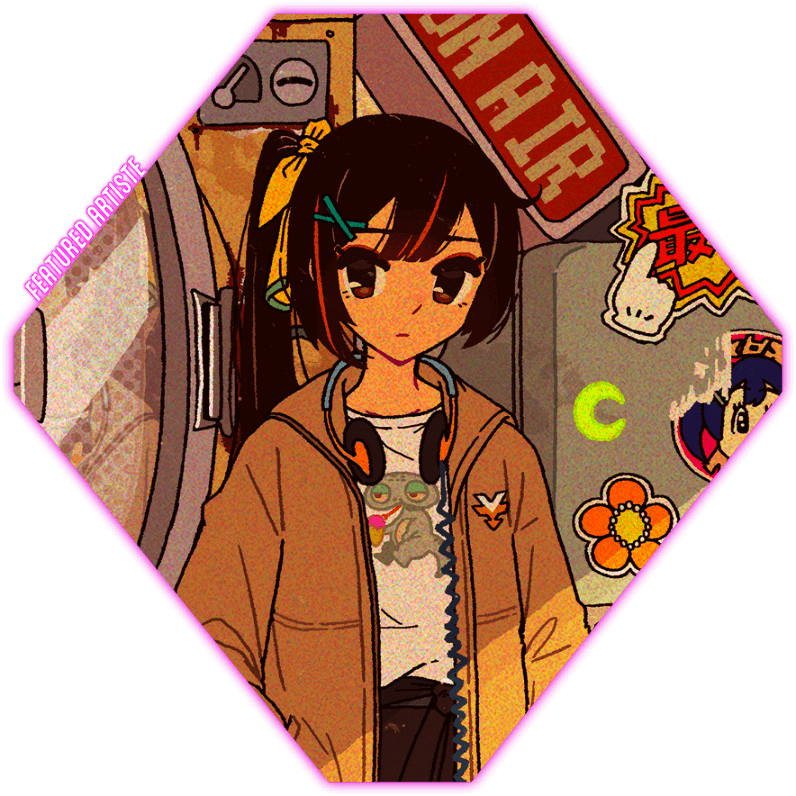 Yuka Nagase
A young musician, wrapped in a mysterious aura with a youthful touch to her singing.

This past August, her track "Torokeru tetsugaku" surpassed 100 million views on TikTok.

With her signature soothing voice and distinct sensibility, she's a breakout virtual artist the world's paying more and more attention to!

Celebrating the 10th anniversary of the TV broadcast of Sword Art Online,"Sword Art Online -FULLDIVE-" is an anniversary event taking place on 6 November at the Tokyo Garden Theater. AFA Singapore 2022 will be screening a recording of the live event, packaged with full subtitles for everyone to follow the events on stage, less than 3 weeks after the event's conclusion.

*Performers are subject to change without notice.